Why things are not getting worse, and why we are always so happy to believe they are… 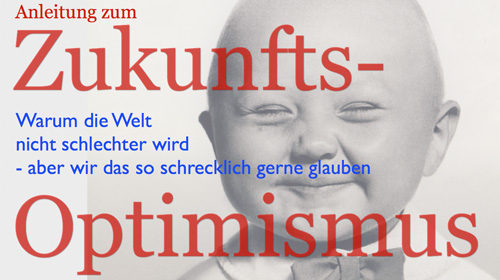 Why do so many people believe in a purely negative and catastrophic future? What evidence is there that the world is not getting worse and how can we overcome a rampant future pessimism?

Only twelve percent of Germans believe that the future could be better than the past. Public opinion shows all the signs of chronic anxiety and an epidemic of hysteria. Fears of doom are increasingly being fuelled, fantasies of economic collapse conjured, and we see ever more extreme problematic and dangerous situations being portrayed in the media.

Waves of collective fear are anything but harmless. They can prevent genuine innovation and serve as a gateway for political populism. Ultimately, they endanger what we call “Future Fitness” – the flexibility and adaptability of a society.

This talk is influenced by findings from psychology and illustrates key examples of problematic thinking about such things as crime, poverty and wealth, population development, etc. My talk shows how far off these negative future scenarios are from real developments and presents a non-naive, but confident approach to change and transitions including: